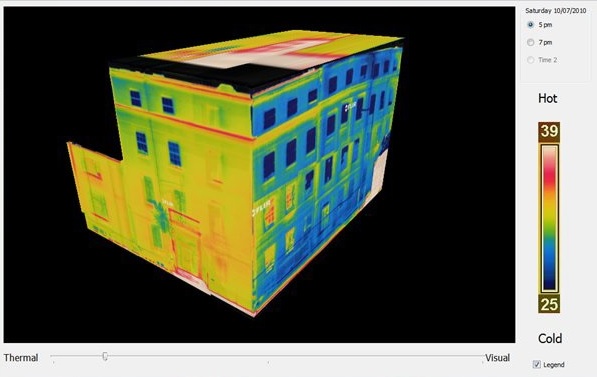 Heating and cooling efficiency is very important in today's world because heating is expensive due to the high oil and energy costs. Furthermore, global warming has to be stopped as quickly as possible. Some of the main causes of energy wastage are small gaps in the outside of buildings, bad insulation or inefficient windows. All of these can be detected with the help of thermal imaging cameras. Currently there exist a number of companies that specialise in such services, however, we are not aware of any that perform 3D reconstruction of obtained models. This project analyses the effect of a new representation for thermal images on the ability of users to locate heat leakages on a building. This new visualization is a rough 3D model of a building. To achieve this, we implemented an algorithm, which creates a simple geometric representation of a scene, which it then textures with visual as well as thermal images to allow users to switch between two views. It also allows switching between images taken at different times.

This report will present a user evaluation in which we compared users' ability to detect heat losses using normal thermal images with our 3D model and also obtained feedback on the Graphical User Interface (GUI) that we had designed. Non-expert users were able to interpret otherwise complex thermal data and to start explaining the patterns they see because the model facilitated a global overview of the building and put each thermal image into context. The model allowed for a much richer and more intelligent interpretation of the thermal data, with users becoming more confident of their assessments.