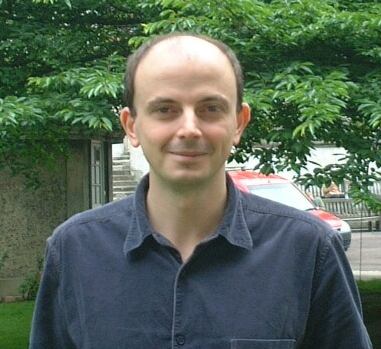 Anthony Steed is Professor of Virtual Environments & Computer Graphics and has joint responsibility (with Dr. David Swapp) over UCL's immersive virtual reality CAVE facility. He is presently engaged in a newly funded EU project focused on the development of next generation telepresence systems: Beaming

This project will bring today’s networking, computer vision, computer graphics, virtual reality, haptics, robotics and user interface technology together in a way that has never been tried before thereby transcending what is possible today. The goal is to produce a new kind of virtual transportation, where the person can be physically embodied interacting with life-sized people who may be thousands of kilometres away. Moreover, this is underpinned by the practical utilisation of recent advances in cognitive neuroscience in understanding the process whereby the brain represents our own body.

This exciting foray consolidates earlier research that Anthony oversaw which integrated neuroscientific advances to gain a better understanding of presence (for more see the Presence Project homepage). It also represents an extension of previous work focused upon telematically mediated haptics as conducted during the Equator IRC Project, which included the 'Hands Across The Water' event wherein researchers in MIT's Touch Lab and UCL instigated the first transatlantic touch

The Equator IRC group also concerned itself with mixed reality and ubiquitous computing in the context of the adaptive, realtime, information outputted by the sensor - aware city. Professor Steed oversaw research which sought to integrate data between static and mobile sensors with the aim of building and visualising a detailed map of pollution in London.

Email: This email address is being protected from spambots. You need JavaScript enabled to view it.